Last week I had the pleasure of attending the 8th annual DevOpsDays event in Austin, TX. The organizers have one of the coolest venues for a DevOpsDays, holding the conference at the Darrell K Royal–Texas Memorial Stadium on the University of Texas campus. The event overlooks the field, and of course, they fired up the jumbotron with the DevOpsDays Austin logo, which looked terrific on the big screen. 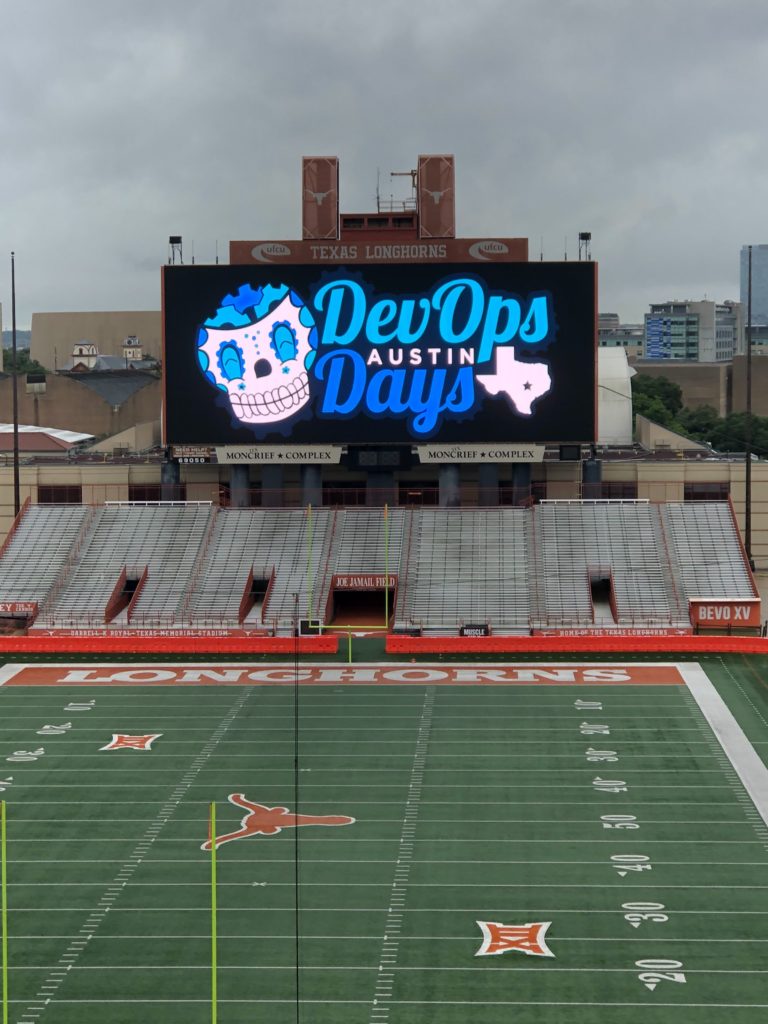 This event has always been a special DevOpsDays for me personally to attend as it was the very first conference that I had ever spoken in 2013. At that event six years ago, I gave a talk about how to retain your hardest to hire positions. At the time I had grown tired with too many conference talks that focused on only how to hire DevOps folks, but it seemed like people were ignoring just how hard it can be to keep these hard to find hires in your organization.

This year I was lucky enough to be chosen to speak at the conference, and I got the opportunity to revisit that talk that I gave six years prior. While six years may not seem like such a long time, in the technology world it can feel like generations. To put the time into perspective, Docker had just been announced only about a month before the event in 2013. I enjoyed speaking and sharing my story with the audience. It was great to chat with folks after my talk about some of the different ways that they hire and retain their employees.

As usual for the event — the rest of the conference talks were extremely high quality. Day 1 Keynotes by Damon Edwards and Wendy Nather helped to kick off fantastic conversations. Day 2 began with the “Godfather” of DevOps Patrick Dubois giving a great talk about his thoughts on the evolution of DevOps since he started the first DevOpsDays in Ghent 10 years ago.

Something new for the event this year was the addition of DevOps Trivia hosted by Patrick Dubois himself. This trivia event ended up being a great way to end the first day of festivities by having groups of attendees working together to answer both familiar and obscure DevOps trivia questions. It ended up being a total blast — and was a fantastic way to unwind after a day of conference talks, open spaces, and the hallway track.

A huge thanks and congratulations to the organizers, the volunteers, and the attendees of this year's DevOpsDays Austin for making it such an excellent and inclusive event. It’s incredible to see so many folks with a high level of dedication to these events — it shows in the overall quality, and it’s why DevOpsDays Austin continues to be one of my personal “don’t miss” events to attend. See you all next year!

Adding and configuring new log management tools can be cumbersome and time-consuming, especially...

Only about four months to go before nearly 60,000 people descend on Las Vegas for the eighth annual...

Fastly is one of the world’s largest and fastest-growing CDN platforms. They provide their...