Last week, our friends at Amazon hosted the 10th annual AWS re:Invent conference at the always-exciting Venetian Resort in Las Vegas. The ChaosSearch team was out in full post-Covid force and felt the incredible energy and enthusiasm as the conference returned to an in-person format for the first time since 2019. 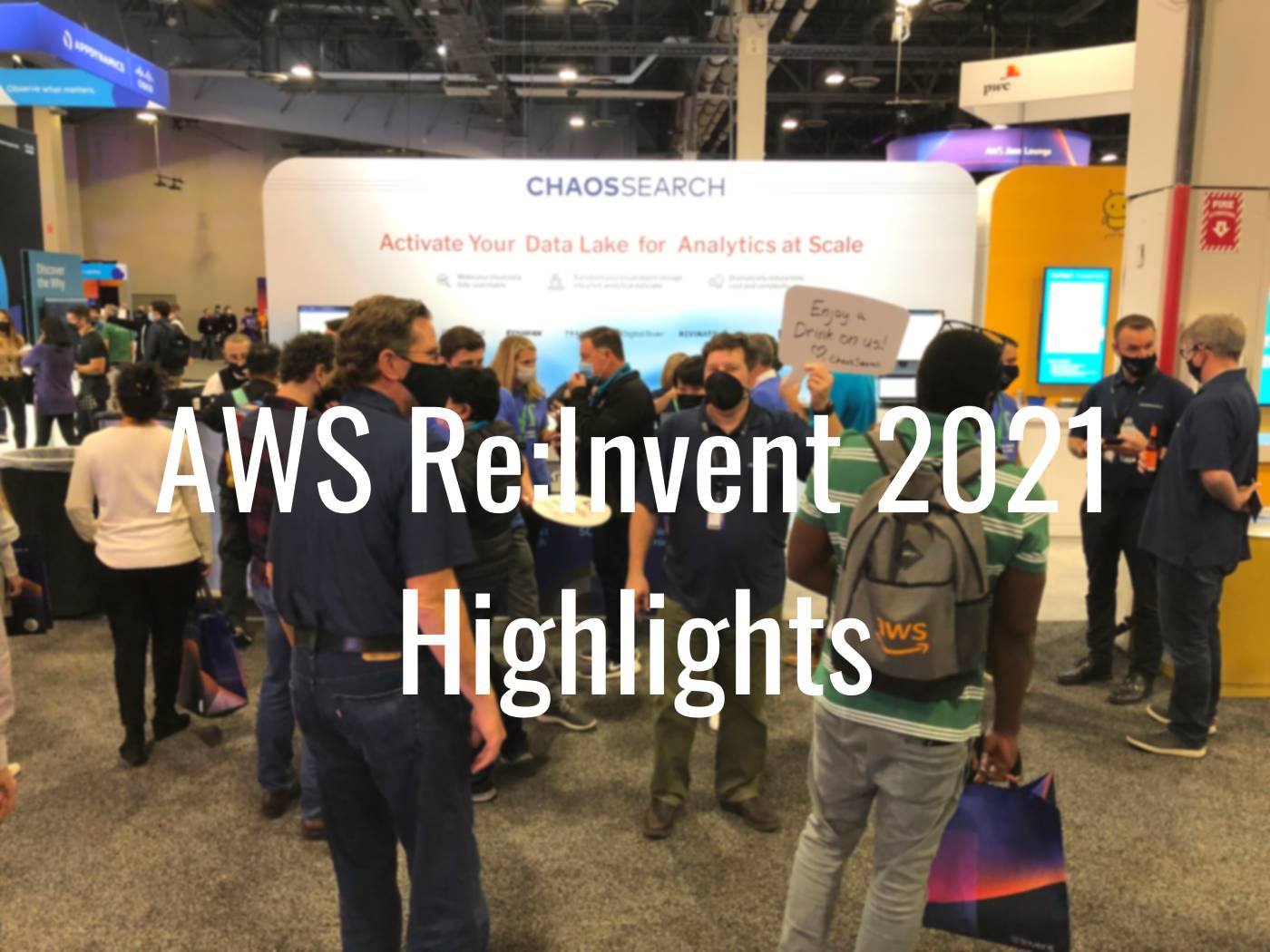 Our team of Chaosians stayed busy in the buzzing expo hall and attending conference talks so we could be first to hear about every new AWS service announcement, feature launch, and innovation. Amazon made huge announcements on every day of the conference, introducing new features and capabilities for existing services like AWS S3 and CloudWatch, and releasing brand new services like AWS Cloud WAN and AWS Private 5G.

Thematically, it was increasingly evident that the range of analytical models and data access methods running on the cloud is growing, and AWS is actively working to bring analytical work closer to their cloud object storage environment (S3). Technology companies are increasingly building solutions that are cloud-first or cloud-native, notably ours here at ChaosSearch, which aim to streamline processes and deliver a single source of truth in the data lake.

To share our excitement and bring you up to speed, we’ve compiled this list highlighting AWS’s ten biggest announcements from re:Invent 2021. We’ve also enjoyed recaps of the event provided by our friends at SiliconANGLE and Corey Quinn that we’d encourage you to check out.

AWS CloudWatch is a monitoring service that provides usage data and insights for applications that run in the cloud. On the first day of re:Invent, AWS announced exciting upgrades to its CloudWatch service that would set the tone for the rest of the conference: Real User Monitoring (RUM), and CloudWatch Evidently.

Amazon has progressively improved CloudWatch since its release in 2009, and these new features will make it faster and easier for developers to build and optimize applications in the cloud.

AWS Simple Storage Service (S3) offers a range of storage classes that deliver the best cost economics for data storage based on the desired frequency and speed of access.

During re:Invent, AWS announced the release of a new archive storage class known as AWS S3 Glacier Instant Retrieval. The new storage class is designed to deliver the lowest data storage costs for long-lived archive data, accessed once every 90 days, with retrieval time in milliseconds.

AWS has also enhanced its S3 Intelligent-Tiering storage class with a new access tier called Archive Instant Access. Objects that have not been accessed for more than 90 consecutive days will now be sent automatically to the Archive Instant Access tier by S3 Intelligent-Tiering, resulting in a 68% reduction in data storage costs with no decline in performance.

We attended the AWS Partner Keynote on the first day of re:Invent, where Doug Yeum, Head of the AWS Global Partner Organization, introduced four new AWS Partner Paths, expanding the Partner Path engagement model in hopes of improving access to resources and benefits, and delivering a more streamlined experience for AWS partners.

AWS released its first Partner Path at the beginning of 2021, with the goal of providing targeted resources and a simplified experience for aspiring AWS partners with software offerings. After seeing an exponential increase in the number of validated software offerings from partners, AWS has introduced four new Partner Paths for organizations developing products and services that work with AWS:

On Day Two of re:Invent, AWS announced a new service offering with the potential to deliver transformational change for its enterprise clients: AWS Private 5G.

AWS Private 5G is a managed service that will enable businesses to rapidly configure high-capacity 5G mobile networks in warehouses, manufacturing centers, office campuses, and other locations. AWS delivers and maintains all of the hardware, while the AWS Private 5G service automates set-up, deployment, and scales capacity based on network traffic demands.

Best of all, there are no up-front or per-device costs - customers will simply pay for the bandwidth and throughput they request. AWS Private 5G is currently available in preview for customers in the U.S.

After announcing the availability of three new local zones (located in Las Vegas, New York City, and Portland) in October of this year, AWS had an even bigger surprise in store for re:Invent: it plans to launch 30+ new local zones in 2022.

AWS announced the first major release of Open 3D Engine (O3DE), an open source project developed in collaboration with Adobe, Huawei, Intel, Niantic, and over 250 developers. O3DE is a 3D engine with a modular architecture that can be used as the foundation for any 3D project.

The O3DE Stable 21.11 release is free to download from Github, and will enable developers and content creators to build movie-quality 3D worlds, realistic simulations, and immersive gaming experiences. By expanding access to free, world-class rendering tools, AWS hopes to empower a new generation of game designers and world builders - and eventually make money when they use AWS to power their creations.

Chatbots have been around since the early days of computing, but recent advancements in machine learning, NLP, and conversational AI have made chatbots better at understanding human language and responding with useful answers. As a result, online businesses are increasingly deploying automated chatbots to triage customer support requests and answer basic questions.

The new Amazon Lex chatbot designer has the potential to massively simplify the process of building and deploying chatbots, cutting design time from weeks to just a few hours.

Also on the third day of re:Invent, AWS announced new Amazon SageMaker features that will improve performance for existing users while making it easier for beginners to start experimenting with machine learning.

The new features include:

Amazon hopes that innovative services like Studio Lab will eliminate barriers to entry and nudge more people into ML - but that’s not all it’s doing to push machine learning forward. The company also announced an AI & ML Scholarship program that will provide $10 million in funding for up to 2,000 students per year.

On the final day of AWS re:Invent, we attended the conference keynote with Amazon.com CTO Dr. Werner Vogels.

Dr. Vogels announced a number of new tools and services for AWS developers, but there was one announcement that really stood out: AWS Cloud WAN. This new service lets AWS customers with globally distributed IT infrastructure connect on-prem data centers to AWS cloud resources with the help of a telecom provider, then monitor, secure, and manage the entire network through a single centralized dashboard.

AWS Cloud WAN is a turnkey solution that promises to reduce the operational complexity of establishing and managing global enterprise networks.

The last item on our list of the biggest news from re:Invent 2021 is definitely not the least.

AWS Amplify Studio promises to accelerate the app development process by allowing developers to build the backend and frontend of a cloud-based application in one visual environment and using a simple drag-and-drop interface.

The service works by connecting AWS Amplify to the UI design tool Figma, so users can build the application backend with Amplify, create UI components in Figma, and visually connect UI elements to backend systems with minimal coding.

Amplify Studio represents a clear step forward in low-code/no-code app development on AWS that will accelerate full-stack app development and make it easier for aspiring programmers to build and deploy their first project. 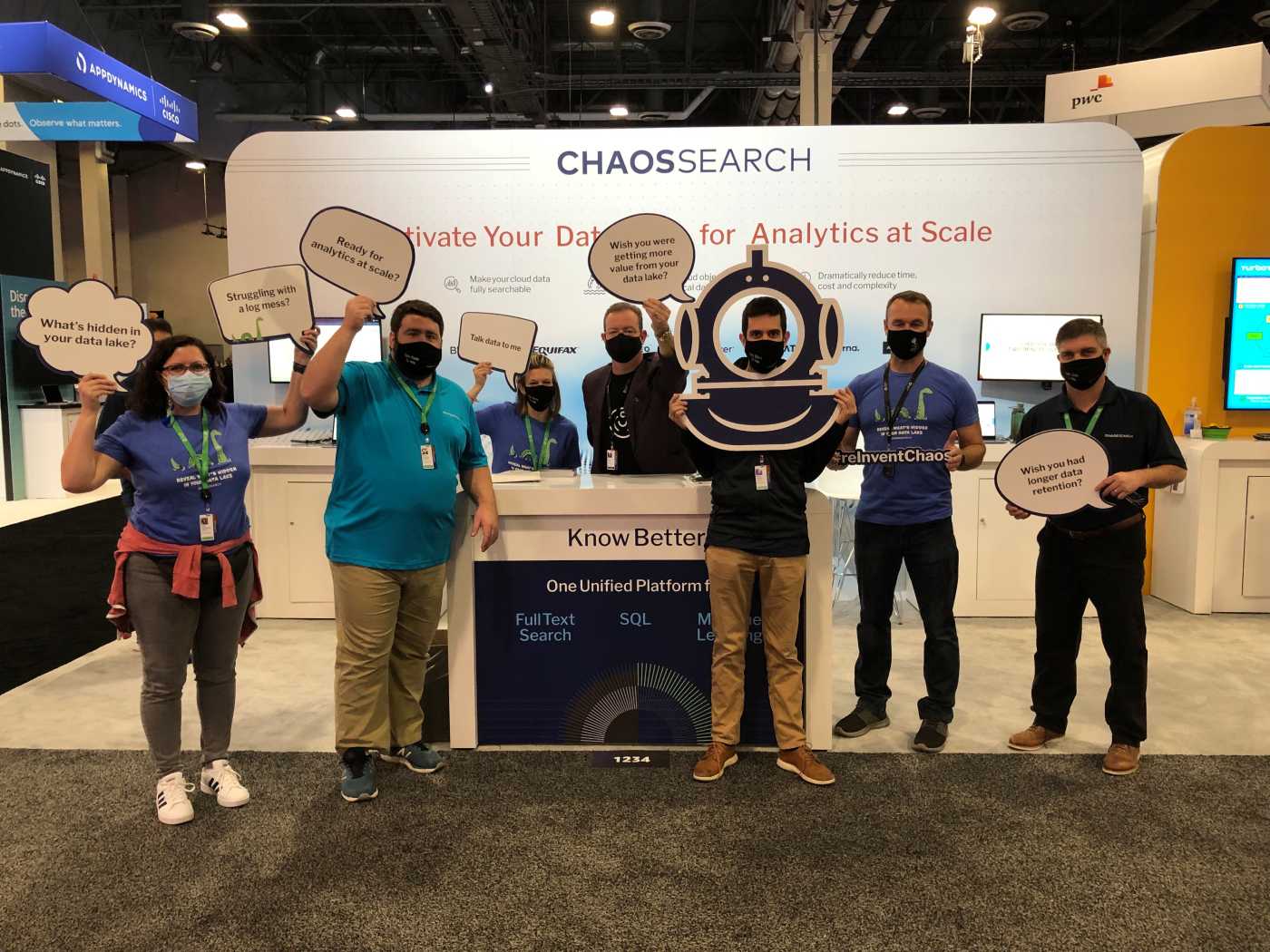 As members of the AWS Partner Network (APN), ChaosSearch had the opportunity to demo our cloud data platform and showcase our innovative JSON Flex feature at re:Invent. We promoted our recent SiliconAngle event - Make Your Data Lake Deliver - and shared select highlights from our new data lake market research. We were also pleased to announce that ChaosSearch was awarded AWS Data and Analytics Competency Status, in recognition of our demonstrated success helping customers implement AWS tools and best practices for data analytics at scale.

Overall, this year’s re:Invent conference was a huge success and we already can’t wait for the next one. See you there!

Are you ready to relive the excitement of re:Invent?

Tune into Raucous re:Invent Recap with Thomas Hazel and Corey Quinn, Chief Cloud Economist at the Duckbill Group, as we recap the biggest feature launches, exchange hot takes, and attempt to sort through the chaos of AWS re:Invent 2021.

Check Out Other Events & Webinars 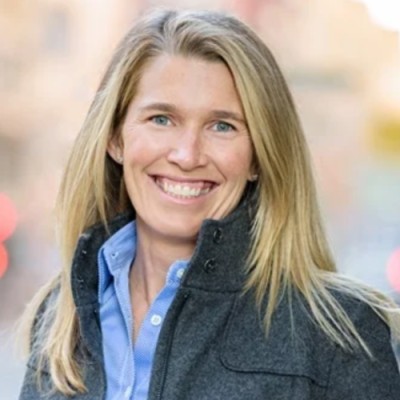 FOLLOW ME ON:
Courtney is passionate about building dynamic teams and developing marketing strategies that help customers understand and benefit from exciting technology. Outside of work, she and her husband enjoy cheering on their three children from many sidelines and discovering all things outdoors in the Rocky Mountains. More posts by Courtney Pallotta, VP Marketing, ChaosSearch
SHARE THIS ARTICLE ON:

This is is the 7th Annual AWS re:Invent conference in Las Vegas. It’s amazing to see just how the...

We're honored to have won this prestigious new award in grassroots voting by Boston’s tech...

ChaosSearch has been named to the 2022 DBTA (Database Trends and Applications) 100 list of “...